The first entry of the list of concours works for flute at the Paris Conservatoire is Berbiguier’s 5th Concertino for flute. It is, however, questionable whether this Concertino was actually performed in 1824, since it was not published until ten years later (Berbiguier published his first Concertino only in 1831). It is more likely that Joseph Guillou, flute teacher at the Conservatoire at that time, chose Berbiguier’s 5th Concerto (published in 1816) for the final flute exam.

Léopold Carrière, born on 12 August 1804 in Brest, was 19 or 20 years old when he won the first price at the 1824 concours. He later became flutist in the Orchestre Porte-Saint-Martin and the Opéra Comique. In the 1830’s he must have emigrated to America. Ernst C. Krohn in his book Missouri Music (1971) writes: „Leopold Carrière’s connection with St. Louis University seems to date from the scholastic year 1837-38. At the Fourth of July celebration of 1838, he led the Philharmonic Band, and at the 9th Annual Commencement, Wednesday, Aug. 8, 1838, he played several flute solos to the accompaniment of Joseph F. Marallano, cathedral organist. That he was possibly  the first director of the Philharmonic Society is suggested by the fact that he is listed as vice-president in the university catalog of 1839-40. On Jan. 1840, he gave a concert with the assistance of local artists, and on the 14th and 20th he participated in the concerts of Charles Balmer and Therese Weber. He is listed in the directory for 1840-41 but not thereafter. George Odell in his Annals of the New York Stage (1931, V: 68) mentions a concert given Oct. 3, 1843, in which ” Carrieve ( sic ) flautist ” was assisting artist. Carrière seems to have married Marie Clementine Papin in 1838. Since Clementine Carrière is listed as ” widow ” in the directory of 1860, we may assume that he died before 1860. She lived to a ripe old age (1818-1903 ).“ (p. 239) In one of the concerts he played a Swiss Air with Variations by Tulou. It may have been the „Air suisse“ from „Récréations musicales“ op. 65, published before 1838. 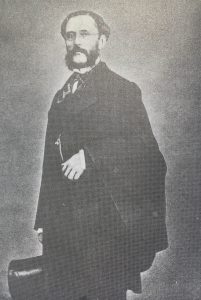 Simon Lauret, born on 25 December 1808 in Orléans, was 15 years old when he won the first price at the 1824 concours. Lauret appears in the collection of Adolph Goldberg who writes: „Born in Orléans on 25 December 1808 as the son of an officer who recognised the young Simon’s inclination towards music and took him to the conservatoire in Paris at an early age. He entered Guillou’s flute class and won the first prize in 1824, after which he worked in the Valentino orchestra. The Valentino concerts enjoyed great popularity in Paris, for their programmes included the symphonies which the famous Conservatoire Concert Society played only to a very small auditorium. Lauret soon made himself known as a virtuoso and travelled to Italy [1834] to give concerts which the press mentioned in the most flattering terms. On his return to France, he settled in the beautiful Provence, where he was universally honoured for his character. From an artistic point of view, his playing was a combination of sweetness and nobility of tone, and although he had exchanged his flute, Tulou system, for a Boehm flute [he refused to play the Boehm flute in 1840], there were no difficulties for him. No one knew how to phrase on the flute in a more perfect way, even the pure virtuoso passages he sang to the delight of the listeners. He died in Marseille on 26 March 1890.“ Lauret was flute teacher at the Marseille conservatory.

In 1818, Berbiguier wrote about the performance of a concerto:

„The CONCERTO is the piece of music that requires the most talent for execution. It is not a question, as in the SONATA, of regularly playing the value of all the notes without disturbing the measure. You have to know how to accelerate and slow down appropriately, and above all not to let the orchestra take over, which, in the TUTTI, always tends to hasten, mainly in the 2nd and 3d, since it is excited there by the solo part which, usually, to warm up the line, hurries above all a few measures before the cadence. Care must be taken to restart the 2nd SOLO in the tempo of the 1st. It is allowed to slow down in the melody, without affectation however, and to animate especially the last line.“

For this recording we use a four-keyed flute from the Tibouvile Frères workshop. It was probably made in the first third of the 19th century. The piano is a 1829 Pleyel.