The 1847 concours provoked mixed views on the present and the future of the young generation of wind instrument players. The author in Le Constitutionnel (10.8.1847) reported with full of hope: “Speaking of wind instruments and the sublime children who devote their lives to this arduous work! To blow for ten years into a trombone or a clarinet, in order to manage, after much toil, after much work, to earn 800 francs in an orchestra or to keep one’s guard up, is this not proof of self-sacrifice and devotion in a century that is generally accused of ambition and selfishness! The competitions have been very brilliant, and Mr Sax can rejoice in advance. His workshops will not be left idle. Here are the names of the winners: Flute. First prize, Mr. Lascoretz; second prize, Mr. Penas; accessit; Mr Heimbach (sic). (…)”

The author of Le Siècle (8.8.1847) had a slightly different, if not opposite opinion: “The wind instrument classes have not been happy this year, few students have presented themselves, and, with a few exceptions, they have shown themselves to be of a mediocrity that can make us fear for the future of our orchestras.”

In fact both statements could be applied for the candidates of the flute class.

François-Émile Lascoretz was born on 14 October 1825 (or 1826) in Troyes. He came from a family of (military) musicians. His father Jean-Baptiste-François-Antoine l’aîné (1786-1854) played the clarinet and composed. He was the tenant of the Café de la Comédie and ran a music school. In 1835 he went to Paris (this could explain his son’s connection with the Conservatoire) and later returned to Troyes, where he taught music and traded in musical instruments. His younger brother Adrien-Antoine-Jean-Baptiste le jeune (1787-1857) was a clarinetist and military musician, like their father.

François-Emile probably received his first musical training from his father, and he might have received flute lessons from the flute player Arnaud, who took an active part in concert life in Troyes. When Lascoretz was 16 or 17, he entered Tulou’s class. Tulou was very positive about his new student. He reported: „fairly good musician, easy embouchure, fairly good tone, lightness in the fingers, I hope he will become a very good student” (1842). A year later, already, Lascoretz took part at the concours. He got an accessit. He might have felt some pressure to finish his studies soon, because they were financed by the city of Troyes, as we learn from an 1845 concert review: “M. Lascoretz fils, laureate of the Conservatoire, played us on the flute variations on a few motifs of the Diamants de la couronne. There is a future in this young man, who has so far shown himself worthy of the sacrifices the city has made to complete his musical education. However he is a little wary of his petulance of young age, he will be able to give more strength and fullness to tone which already does not lack sweetness and harmony.” (L’Aube 3 April 1845). Nevertheless, it will last another two years before he takes part in the concours again. In the middle of his studies, he somehow lost motivation, as Tulou reported: „quite good embouchure and a lot of ease, he would need solfège lessons (1843); has the means to do well, but his shortcomings in class and his laziness prevented the progress he should have made (1844)”. Shortly after he regained his composure and, after winning a second prize in 1846, completed his studies in 1847. Tulou was quite content: “, is fine; but no apartitude in the class (1845); has made significant progress; good embouchure, very easy, fairly good musician; but little apartitude in the measure (1846); good embouchure – bright fingers, good musician; but a lightness that unites with the good quality of his execution (1847)“ The city Troyes celebrated this success as we read in an article of the Troyes newspaper L’Aube on August 4: “The young Lascoretz, who had obtained the second prize for flute at the Conservatoire two years ago [here the author is mistaken], has just completed with dignity a work so well begun, by meriting the first prize, which has just been awarded to him in the solemn session of the August 3. While congratulating the laureate on this fine triumph, we applaud the fact that the sacrifices made by the city, in favor of this young man, have produced a favorable result. It is rare to achieve such honorable and decisive success. We are told that young Lascoretz is to settle in Troyes. We welcome this resolution with pleasure. The crowned Artist will be a useful auxiliary for the Philharmonic Society; and it is likely that with such a background he will not lack pupils.”

Probably during his studies Lascoretz played in the orchestra of the Théâtre de l’Ambigu-Comique. As his father, his uncle and Tulou he was member of the Association des Artistes musiciens. Back in Troyes he played an active role in the city’s cultural life. He played flute in the Orchestre de la Société philharmonique and a few years he became their conductor. Lascoretz also became director of the Orphéon, a musical institution dedicated to singing and music education, and founded a fanfare, which was expanded to harmony music in 1859. He also composed several pieces, including Trois trios faciles et brillants for flute, horn and bassoon, a polka for piano and orchestra (1853) and a chanson politique et patriotique.

In the Société philharmonique he played and conducted the orchestra at the same time as the author of a review from May 15 1859 reported:

“One can see that he is in control, that he is sure of himself, that he no longer has to reckon with those material difficulties that often cause hesitation and deprive the performance of the brio that takes you away, the casualness that charms. (…) Emile Lascoretz, the Proteus of music by his talent, who can be a first-rate flute player, violinist, cellist and anything else you like, if necessary, did even more in Guillaume Tell; he conducted the orchestra and played the part of first flute at the same time: his instrument was a baton, his baton an instrument, and all of this to everyone’s great satisfaction, thus contributing doubly to the unquestionable success of the masterful overture. Rossini would have been pleased to see his favourite work so perfectly performed.” Unfortunately, François-Emile did not live to be old. He died on 8 September 1860. The Musée d’art et archéologie in Troyes houses a bust of Emile. It was made in 1851 by his friend Louis-Auguste Delécole (1828-1868). 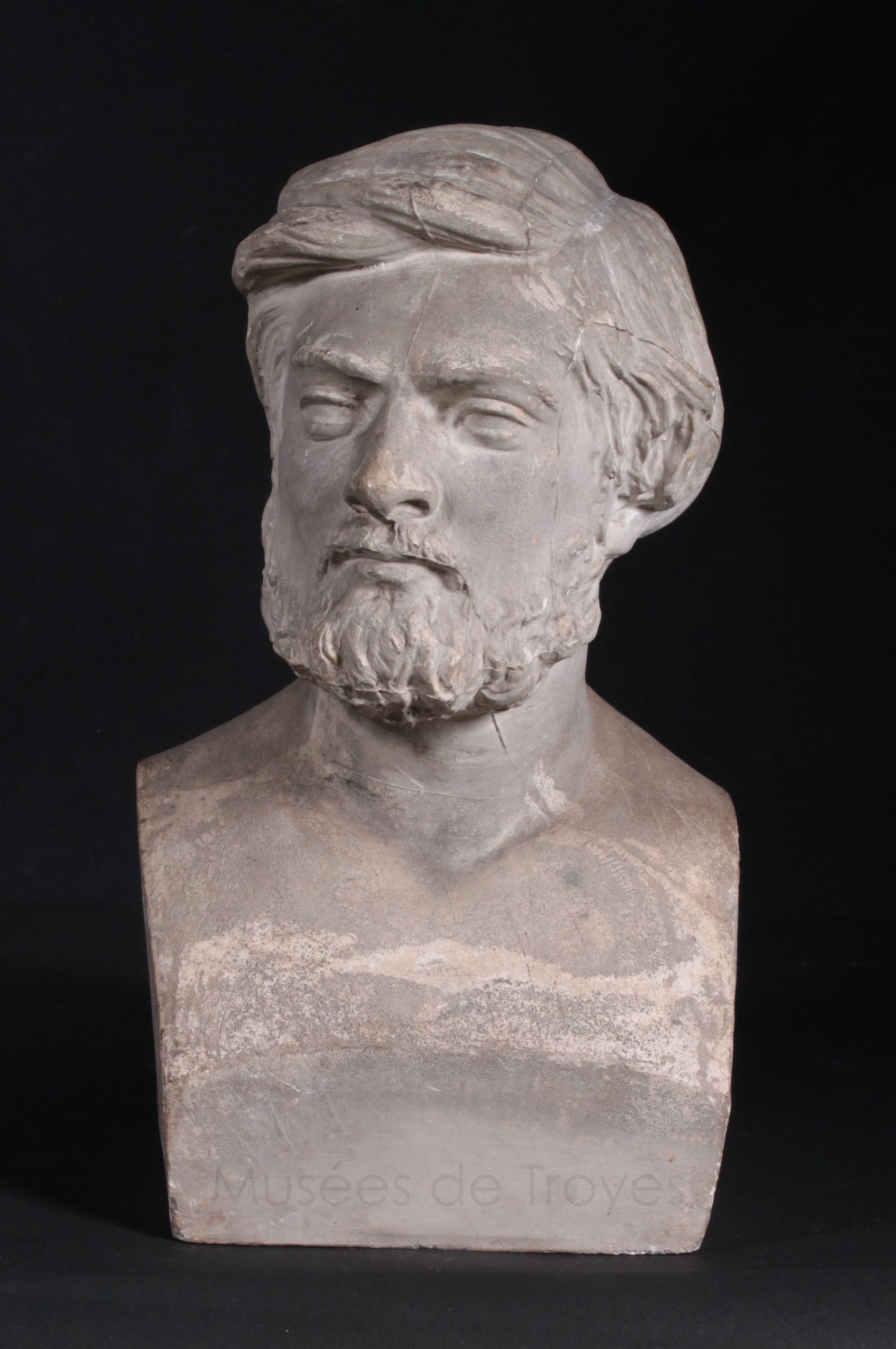 Not much was written about his playing. There is, however, a short note about the choice of music Lascoretz made for a concert in 1855 that tells us rather more about the author’s taste than about the execution: “Mr. Lascoretz, a distinguished laureate of the Conservatoire, who accidentally arrived in Bar(-sur-Seine) during the concert, and who only gave us an improvisation that was a little too fantastic, made us regret not hearing him in a well-chosen and well-prepared piece. Let’s hope that he will make it up to us at the next concert. In our opinion, the difficulties appeal to few people. As for the mass of listeners, it does not matter to them that an artist has overcome the greatest difficulties, for example, by playing the violin on a single string; by touching the piano with the left hand instead of using both hands, or by playing the flute through the nose like certain Polynesian islanders; what they want are sweet and melodious sounds, music that pleases them like that of Donizetti or Auber.” (Le Petit Courrier de Bar-sur Seine 11 May 1855)

Jean-Baptiste Penas, born on 22 February 1828 in Metz, entered the class on 4 October 1844 at the age of 16. He was 18 years old when he got the first Accessit at the 1846 concours. He played two more concours in 1847 and 1848 where he won the second and first price respectively. Penas was a good student and got good reports since the beginning: “has only been in my class since the beginning of the holidays. I think he will be a good pupil (1844), in (?) at the Conservatoire – good subject, working hard; but not advancing very rapidly; works hard and makes good progress (1845), good worker, has made progress; good pupil (1846), works with zeal – good musician – has made good progress (1847), good musician, easy execution, good orchestral flute. (1848)”

In 1846-47 Penas was flute player in the Théâtre français, and in 1847 he played in the Société philharmonique. Shortly after he must have inscribed in the Gymnase Musical Militaire, another Conservatory in Paris, where he studied solfège and harmony. In 1851 we read in the Revue and Gazette musicale: „Distribution of prizes: (…) Among the crowned students, several took double crowns. One of them, Jean-Baptiste Pénas, of the 7th line regiment, winner of the solfège and harmony, was also made head of music (chef de musique) by the section of the Institute (…) Before the distribution of the prizes, a pas rédoublé, composed by the student Penas, was performed by the cavalry music [= brass band], placed in the open air, next to the room where the session was held (…) [In the following concert] the students Penas and Piau played an oboe duet very well.” (Revue et Gazette de Paris 19.10.1851). Penas stayed in the military and continued leading the 7th line regiment at least until 1859.

Frédéric Heinbach was born on 31 August 1828 in Paris. He won a second price in 1850 and a first price in 1852 at the age of 23 years. Heinbach’s career at the Conservatoire was rather uneven. From the beginning, Tulou did not place much hope in his artistic abilities, and his first judgement is not particularly positive: „only since short time in my class, but I think he does not have the skills to become a distinguished pupil; no ease (1843)” And indeed, he makes only slow progress, as the reports of the following years prove: „bad musical organization; does not have the ease on the flute; no ease for playing the flute (1844), no disposition for the flute, and his progress is not noticeable (1845). In 1847, he finally seems to make progress. Tulou writes: “quite good musician – made sensible progress (1847)” and lets him take part in the concours. He wins a first accessit, yet he makes little progress: “works a lot, and despite that his progress is barely noticeable; worker, progress slow (1848), works with zeal – made progress; little progress, and yet he works a lot; works a lot without great success (1849)” In 1848, Heinbach wins a second prize, but still he will not succeed in completing his studies with a first prize the following year. His zeal, albeit not very successful, prompted Tulou to ask the directorate for an exception to the regulations in 1850: “following the rules, this pupil cannot take part at the concours anymore as he had the 2d price two years ago and had gained nothing last year, nevertheless this young man recovers from a heavy disease that did not allow him to show all he could do on his instrument – in favour of his gained zeal, his exactitude in the class and the awkward position in which he found himself past year, could not you, Monsieur the Director, allow him to present himself again in the concours?”. Heinbach was granted this exception, and Tulou reported hopefully: “I think he will now make a bit of progress”. In his last report in 1851, however, Tulou seems to have finally capitulated: “arrived at a point now that is difficult for him to pass. It’s a good orchestra flute; works a lot without making significant progress”. Nevertheless, Heinbach finally received a first prize in 1852. It is interesting to note Tulou’s statement that Heinbach (despite all his shortcomings) would make a good orchestral flute player. What qualities did he possess for this?